“APICE”, a 5 min short-film, is the first European movie shot with the new Angénieux FF Optimo Primes. Directed by Cándido Perez de Armas and photographed by Santiago Torres, Ápice is about the death of two elder people, a moving topic dealt in a very sensitive way where “you can see the souls in the camera moves”. 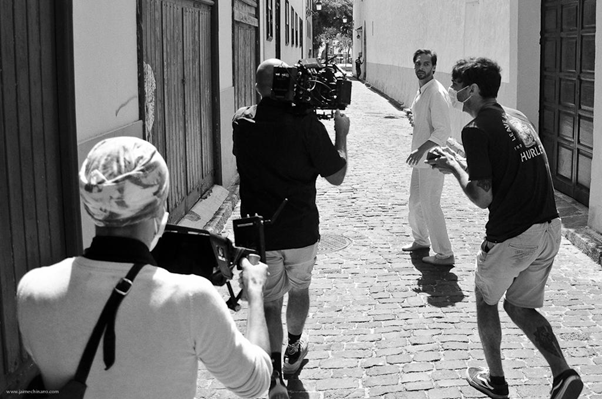 The souls are represented by camera moves which are more free and open. Handheld, wide travellings or aerial shots, guided by the actors playing, so that they are the witnesses of the long trip they have undertaken in such a short time.

The match is the visual leitmotiv of the story. It represents the true moment of the movie; for that reason we have used optics allowing us to shoot really close to a tiny flame in order to be able to follow its "walk" during the triple parallel editing of the movie.” said Cándido

For this movie shooting, the production had three days only. All outdoor shots were made on Tenerife island. The crew then moved to La Palma for the ending outdoor scene in Fuencaliente and the last day went back to Tenerife for the inside shots.

“This production would not have been possible without the incredible professionalism and the working rhythm of all the crew. Santiago, Hector, Dailos, Facun and Álvaro did a fantastic job during the shooting. It was very complicated to shoot as many scenes in one shooting day but we finally did even more than expected, thanks to their love and dedication to the project. The production crew, managed by Erika Cabrera, deserves a special award. To have all the staff travel from one island to another wasn’t something easy, all the more with all the gear and optics, in such a short time. She did a really amazing job.

It hasn’t been neither easy for the actors Sonya Durango and Abraham Gómez, as they had to adapt to the shootings rhythm, in places where acting is not easy. A hostile and windy land, where Sonya had to run, or a canyon which Abraham had to climb. And all of this with an overwhelming acting. When you shoot with such a high-class team, the obstacles become goals for the creation.”

Cinematographer Santiago Torres had already worked with Cándido before APICE, who is one of his favorite director:

“On set people call him the “CANDIVERSO”, a mix of Cándido and universo ! Cándido loves shallow depth of field, I would even dare to say that he likes some out of focus and imperfection. A few times, the focus puller was having a hard time, while Candido definitely loved the “imperfect shoot”. I used the six focal lengths we have on set: 21, 28, 32, 40, 50 and 135 mm of Optimo prime series.  I need to mention first the softness of the 135mm, we used it with out of focus foregrounds. The 50mm, the 40mm are amazing for portraits, the wide angle shots done very close from the actors, and the bokeh softness. What I appreciated the most: their size, their softness and how fast they are. In 25 years of working, I’ve used almost every Angénieux zoom. When I started as a focus puller, I remember that all prime sets were always used with the beautiful 25-250. I love the Optimo Style zooms They are a safe complement to any prime series. I also know the EZ series, with which I have shot a lot these last 5 years. I just ended the shooting of Benito Pérez Buñuel (http://www.benitoperezbunuel.com/), which I did with the EZ Full Frame on the Sony FX9. I love the final result “

“In 2021, the movie will start travelling around the world. Because it is with no dialogue, we have much more options for its international distribution. At the moment, we already have one event where we’ll first show the movie: nothing less and nothing more than the official selection of the Movie Festival “Isla Calavera” 2020. We cannot be happier!” concludes Cándido.

and the great making of