« Les Misérables » tells the story of the suburbs, an area that French film director Ladj Ly knows well.  He lived in Montfermeil, a suburban neighborhood outside of Paris. “Les Misérables” is a long-matured first feature film. The documentaries he did before were just the path to this movie. After the Prix du Jury at the 2019 Cannes Film Festival, the film was selected to represent France at the 2020 Oscars, and nominated by the Academy in the Best International Feature Film category. Director of Photography Julien Poupard (AFC) shot the entire film using only Angenieux zoom lenses.

Both Ladj and Julien graciously accepted our request for an interview.

I had this movie in mind for years. I tell a story that I know, I am speaking from personal experience. For me, film projects are like powder kegs and this film is a warning call to politicians so that they become aware of the misery of these places and that urgent action is needed. I wanted to keep an open ending to say there’s still hope.

The movie was shot in 30 days, with a 1.4 Million euro budget. Fortunately, I know everybody there and they all helped. We could not have shot anywhere else with such a budget.

In this movie, I wanted to position myself from the police officers’point of view : this cop who shows up, knowing nothing of this universe. The spectator discovers it with him.

It is also a movie about children. The project’s future will depend on them. I have created a new cinema school in France with my collective Kourtrajmé in order to raise awareness among young people on cinema tools. Especially to empower those who have things to say. I plan to open film schools in Dakar, in Ivory Coast, Mali, Burkina Faso, Morocco, China, and Brazil…

First feature film, Prix du Jury in Cannes, Selected to represent France at the 2020 Oscars, nominated by the Academy, how does that make you feel?

It’s just staggering really, but I try to remain the same person.

Could you please describe your vision of the film…What “look” were you going for? Why Julien Poupard?

I have always shot documentaries myself so it was not easy to delegate, but the meeting with Julien Poupard was extraordinary. We were on the same page, we spoke the same language. He and his team had an amazing energy and made this shoot wonderful. I have a background in documentary filmmaking. I like to bring documentary style to fiction : hand-held camera, close-up shots. I find it boring to put a camera on a tripod. Julien chose the camera and lenses, I trusted him totally on that. 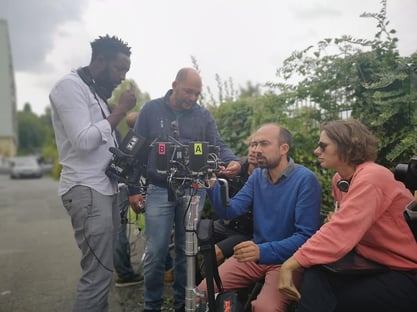 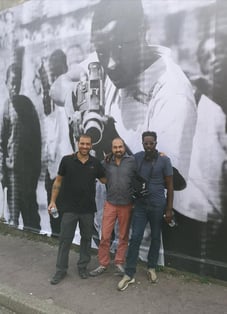 Are you happy with the images of the film? Do you have other film desires?

I am very happy with the images and I am preparing two other projects on the suburbs.

Why did you accept this first feature film by Ladj Ly?

When I met Ladj, I immediately thought he had things to say, with a certain sense of urgency. Ladj lives in “Les Bosquets”, the area where we shot, he knows the place very well, he is at home. And as he says, “it is my open-air studio”. I think it was a key for the film.

How would you describe the director-dop relationship on the set of « Les Misérables »?

We got along immediately, as if we had known each other for a long time. We had a few common references such as Bloody Sunday or Detroit. We trusted each other, which allowed us to try things, to take risks…

Was the film made with our zoom lenses?

These zooms were great and perfect for this movie. They are lightweight so ideal for handheld. They have a fast aperture and very interesting flares in my opinion.

How did our zooms serve the image intensity?

On « Les Misérables », we wanted to be able to change the focal length all the time in order to give an immersive effect to the film. Give a continuous tension,  go from a wide to a tight shot. The camera had to be a character on alert, on the lookout.

The scene with the lion in the cage is very trimmed because we had to make some shots with the real lion and some without, so it requires a precise shooting script for the day planning. But inside of that, we tried to give life to the camera, to avoid something static, to give a dynamic movement to the scene, and create tension.

For the final scene on the stairs, we wanted to show a progression, give a feeling of the police officers emotions and captivate the audience more and more. We started with the Steadicam on a sequence shot and then with a handheld camera, soft and then stronger and stronger. We also wanted to change the points of view, to show the perspective of the police, the young people, the mayor … The space was quite limited so we mostly shot with only one camera. There was not an ultra-precise script but I felt supported by Ladj’s and the energy from the young people.

I think that for Ladj, the zooms joined his film grammar and I think he wants to explore more the possibilities of the tool.

In January 2020, « Les Misérables » overpassed 2 million admissions in France. Ladj Ly managed to federate around his film and the film is now distributed in Europe and in the United States. Since its nomination for the Oscars, it has also won a Goya 2020 for Best European Movie in Spain, a Lumières 2020 for Best Movie in France, and has been selected for Césars 2020.

See full list of movies shot with Angénieux lenses in the race for Oscars 2020 https://www.angenieux.com/angenieux-optics-at-92nd-oscars/