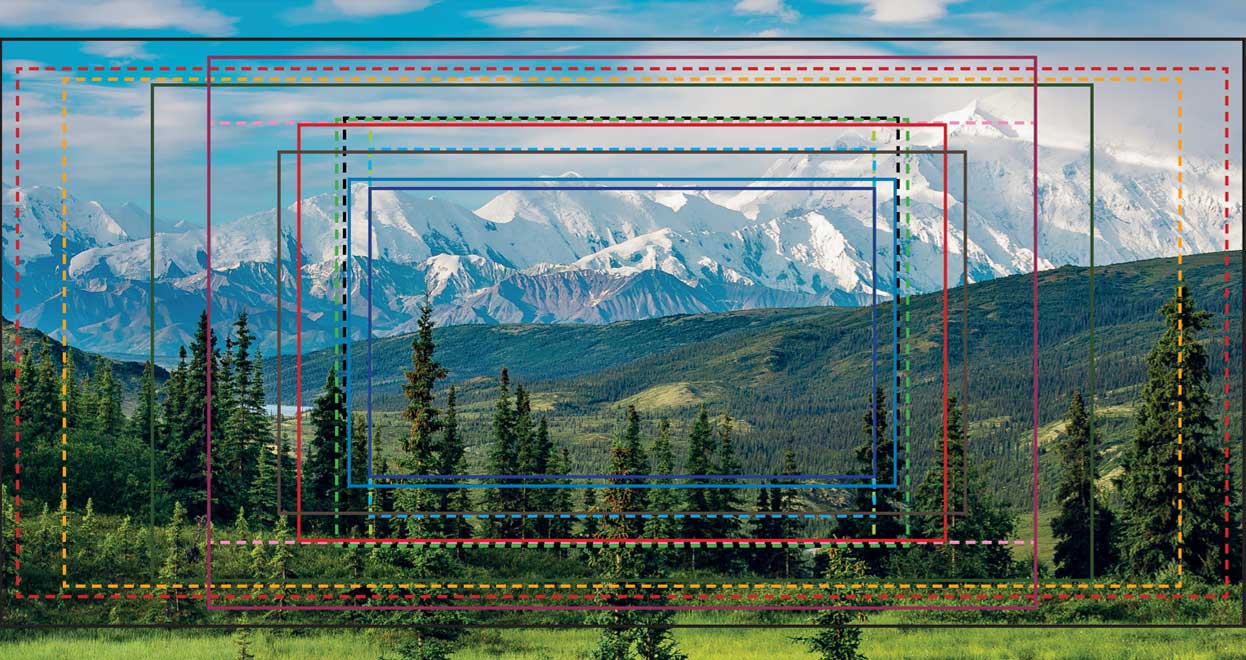 Since the beginning of the 20th century, the formats have been subject to regular changes generating complete revolutions for cameras and lenses. The latest ones come with the Full Frame cameras recently presented: Sony Venice, RED Monstro and others to come. This new market trend is pushing lens manufacturers to adapt their lens offer.

Once upon a time… a format story

Since the beginning of cinema, the films have been shot in 35mm.  In 1909, in the US, the Motion Picture Patent Company standardized the film format based on William K Dickson work. While working at Edison’s lab Dickson used a 35mm film from Eastman Kodak and moved it vertically in the camera gate. Using a high of 4 perf and 4:3 aspect ratio, the standard image on the film for motion picture had a 30.5mm diagonal. This was at the time of silent movies.

From the Academy Format to Cinerama

When sound was added on one side of the film, in the late 20s, the Academy of Motion Picture established a new standard with a 1.375:1 aspect ratio. This new standard called Academy Format had a diagonal of 27.2mm. In the 1950s, as household started to buy television sets which kept the 4:3 aspect ratios, the studio started to look at creative ideas for bringing the public to the theater. One of them was to have a wider image in order to provide a more spectacular experience for the audience. Cinerama was the first system used for widescreen film, but as it required the use of 3 cameras for shooting and 3 projectors for viewing it was a complex and expensive.

Birth of the Cinemascope

Then 21st Century Fox had the idea to use the anamorphic system invented by the French engineer Henri Chretien to make widescreen motion pictures. The cinemascope uses the standard 35mm film but the lens mounted on the camera is built with cylindrical elements for compressing the image horizontally on the film. The image is then stretched while projected in order to create a scope aspect ratio. After several change on aspect ratio, the Cinemascope has been established with an image of 4 perf high on the film having a 28.8mm diagonal image circle, creating a 2.39:1 aspect ratio on the screen. All major Hollywood studios adopted the Cinemascope in the mid-1950s except one, the Paramount Studios.

Paramount decided to increase the size of the image for achieving less grain by using the 35mm film on the horizontal position on the film gate, using 8 perforations and a 1.85:1 aspect ratio. The new format called Vista Vision was first used in 1954. It had an image diagonal of 40.4mm. But Vista Vision was not good enough for some people, so in the mid-1950s a new  65mm film stock was used to reduce the grain and get a beautiful clean image. Based on a 65mm film camera, Panavision build the Super Panavision 70 system which was used on spectacular movies such as Lawrence of Arabia or Grand Prix. But filming in Super Panavision 70 was very costly, and as the quality of the film improved, the 70mm and Vista Vision became marginal.

Since the late 1950s a new trend of filming started around the world.  It took its roots in the documentary still filming called Verite or Direct Cinema.  In France, a new generation of cinema- tographers started filming naturally, having the camera hand held, shooting on exterior locations. They became fans of the zooms made by Pierre Angenieux as they provided the freedom of framing quickly and moving fast. The “Nouvelle Vague” became a reference for a lot of cinematographers but it took until the mid-1960s for Hollywood DPs to adopt that new technique. Despite most of the movies from the late 1960s were shot only in 35mm, some cinematographers chose to use 16mm cameras for the held shots due to the lighter weight of the camera and lenses. 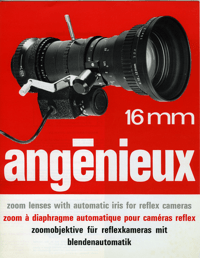 The way to Super 35mm

As the equipment option on 35mm film suited the need of that new generation of cinematographers and its cost was reasonable, the format became again the standard for motion picture productions and other format such as Vista Vision or 70mm ended up being used only for niche productions such IMAX. In 1982, cinematographer Joe Dunton, while working on the shooting of Dance Craze, decided to shoot that cinemascope production using spherical lenses. In order to increase the resolution of the image, he modified the camera mount and was able to use a wider area on the 35mm film. He could achieve that as he was shooting silent. The new format called Super 35mm, using an image width of 24.89mm and a height of 18.66mm in 4 perf, became very popular in the 1990’s.

2/3” HD : the use of Digital Cameras for Cinema

In the late 1990s and early 2000s, 2/3” video cameras with HD capability using the 24 frame/s film frame rate started  to be used for shooting movies. George Lucas was one of the first cinematographers to use these cameras on the second saga of Star Wars. Despite the good image quality, 2/3” HD cameras have a limited optical aperture due to the prism in front of the sensors, preventing the use of fast lenses.  Cinematographers no longer had the freedom of achieving a narrow depth of field. Their impact on motion picture productions was limited.

By the mid-2000s several cameras using a single large sensor including Dallas Origin, Arri D20 and D21 and Panavision Genesis entered on the market. Red Digital had a great success introducing the Red One which was equipped with a single 35mm, having an image area of 22mmx12.6mm in 4K. The camera was compatible with all the optics design for 35mm film cameras. They were followed a few years after by Arri, with the introduction of the Alexa in 2010. That camera was equipped with a digital sensor using an image area of 27.3mm image diagonal.  Sony and Canon followed with new digital cameras with image size under 28mm diagonal.

All the way up to Full Frame

In 2013, the introduction of the Red Epic MX, a 5K camera with 31.4mm sensor diagonal, started the trend of an increasing of sensor size in order to achieve a better resolution.  Lately Red equipped its Epic camera with two options of 8k sensor, the S35 Helium sensor with 33.80mm diagonal and the Weapon 8k with a 46.31mm sensor diagonal. That FF/VV  type sensor was also featured in Panavision Millenium DLX camera.  In parallel, as Arri needed to find a way to increase the resolution of the Alexa to stay on the resolution race, they pushed the image size of the Alexa sensor to a 33.59mm image diagonal (Open Gate mode).  Arri also introduced the Alexa 65, a camera using a combination of three 35mm sensors in order to achieve a very large image area of 60mm diagonal. More recently, Sony presented its new Venice camera equipped with a Full Frame 24mmx36mm sensor and Red Digital released the Epic Monstro, a VV camera equipped with a new generation of 8K sensor of 46.31mm sensor diagonal.

As we have seen, despite the fact that 35mm has been the dominating format since the beginning of cinema, there has been always a trend of introducing new formats in order to achieve better resolution. That was the case for film in the 1950s and it came back again in the digital age.  As sensors have a better resolution and dynamics, the same camera can be used with different format configurations. For instance, the new Sony Venice can be configured in Full Frame with 5.7k to 6k horizontal resolution depending of the aspect ratio, or in S35 with 3.8k to 4k horizontal resolution. While using that type of camera the cinematographer has more freedom to select the format depending of his needs.

A recap of the formats 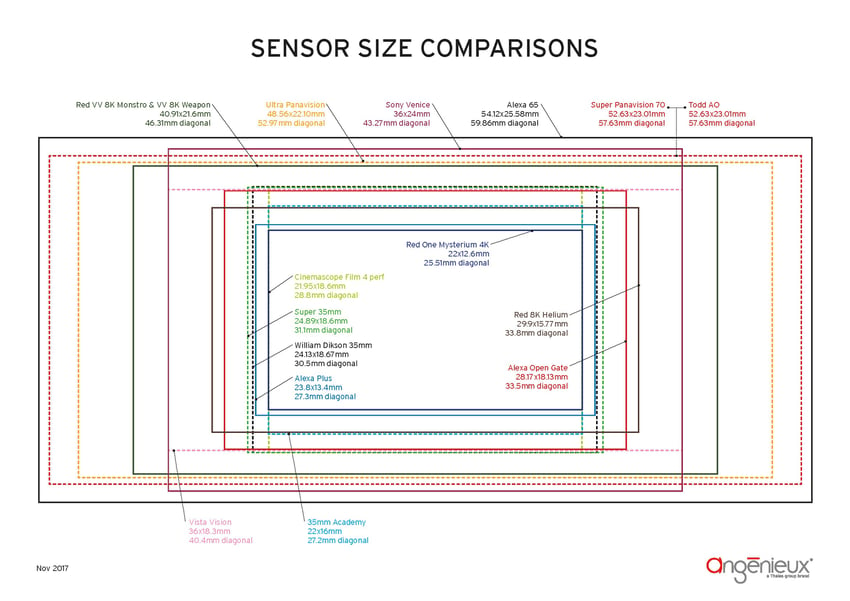 A new Generation of Lenses for the New Cameras

It’s always a challenge for optical manufacturers to adapt to the new camera trends as changing the format means changing the focal length and aperture of the optics for an equivalent angle of view.  Some Full Frame lenses have been showing up on the market .

The optical rear group of the Optimo Ultra 12X can be swapped to cover multiple image formats from S35 ( image diagonal 31.1mm), to U35 (image diagonal 34.6mm) or Full Format (image diagonal 46.3mm), while offering even better optical performance, improved mechanical stability and serviceability than the industry reference Optimo 24-290 that it will replace.

With such a system, Angenieux offers its clients a great way to adapt their lenses for a large majority of image formats, and at the same time minimize the investment, resulting with a faster return on investment.

Follow-us for a dedicated article on the IRO technology coming soon.

Find out more information on our Optimo Ultra 12X lens and get access on its technical documents.
Click below !

The IRO Technology by Angénieux : an innovative lens design for different lens configurations